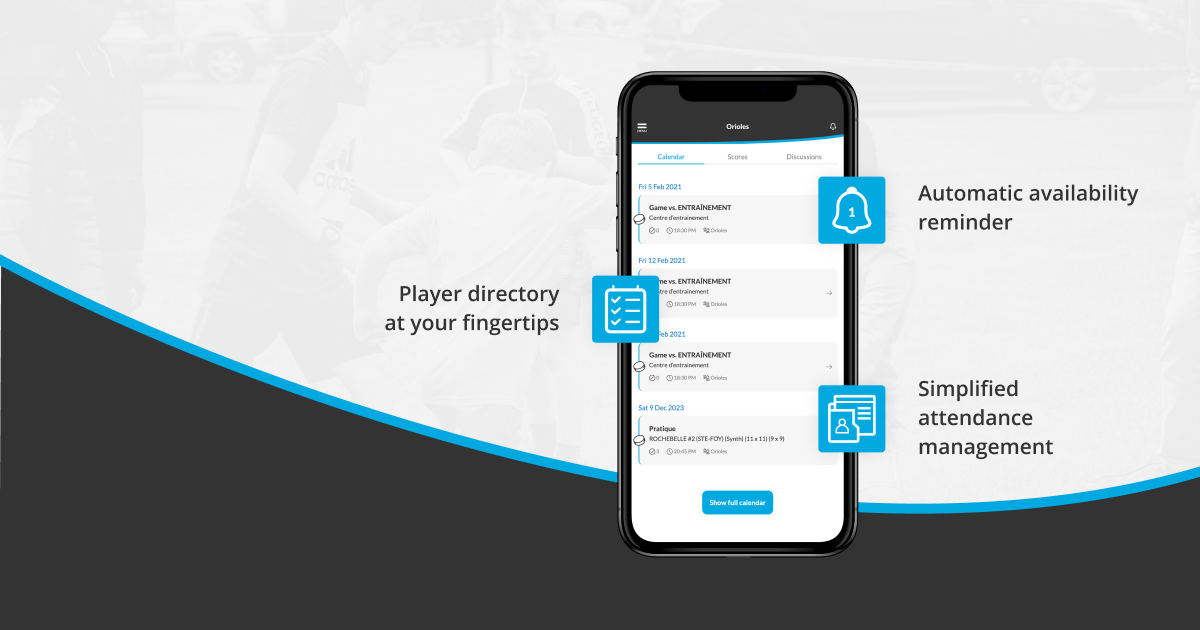 Sports team management no longer has any secrets for you? Attendance management is difficult and you feel that no tool could make it easier for you?

Think again! With sports team management app, you can say goodbye to your old methods and enjoy your work even more!

Julia’s parents are going on a work trip next weekend. Julia will miss the ringette tournament she has been waiting for for a long time.

In addition, Julia’s dad forgot that he was in charge of buying snacks for the tournament that takes place during their absence.

The coach is furious, as he was not aware that Julia was going to be absent and so are the other parents, as they have no snacks to offer the team between their games.

How would the MonClubSportif app have facilitated communication between Julia’s parents and the organization members?

From the app, under the team profile, you can find the personal information of a team member.

You can find the contact information for players and parents. Note that the members’ data is protected in the application. You can also quickly send a message to other members of the organization in the “Discussion” tab.

By accessing the coordinates of the parents from their mobile, it would have been possible for Julia’s parents to contact the coach to inform him of their absence.

If the coach had been notified, he could have found a replacement and asked another parent to buy the snacks.

An even simpler option would have been to send a message to another parent via the “discussion” tab and to plan a carpool in their absence. She then could have participated in the tournament.

Whether it’s carpooling, finding a replacement, or announcing a postponed game, it’s the perfect tool to communicate quickly with members of your team.

“The “discussion” function greatly promotes communication between parents. They talk to each other to plan transportation. One week it’s him, the other week it’s her. It’s fast and it keeps parents from having to enter every contact in their phone.” – A technical director who has time

Elliot has been a soccer coach for a long time. Since last month, he has noticed that players are more absent than usual. As the players do not take the time to contact him to inform him of their absence, he does not have time to find replacements.

Elliot asks for the cooperation of the parents and players to advise him in case of absence.

He tried everything, a private group on Facebook, WhatsApp, he even tried to call the parents one by one the day before a match.

A few weeks later, the situation has not changed. He is discouraged and no longer knows what to do…

How could MonClubSportif help Elliot?

Use the “Attendance Management” function in the MonClubSportif application. This feature allows parents and players to indicate their attendance directly from within the app.

It is therefore possible to tell the coach in advance if a player will be absent or present at a practice.

In case of an absence, a player can specify the reason and the coach will be automatically notified.

With this type of application, Elliot would be able to know the exact number of players that will be present at a practice or game.

In that case that more than one player is absent, he could quickly try to find replacements or substitutes.

“The app greatly simplifies attendance management, so we are notified when a player needs to leave. It’s really easier to find reservists.” – A Happy Soccer Coach

Jules has been the technical director of a handball association for 5 years. In the past year, he has had to find 2 new coaches for the association’s All-Star team, as they dropped out because of the high workload.

For Jules, a good work environment is very important, but he no longer knows how to lighten the burden on coaches, and he doesn’t want to hire another coach without finding the best solution out there!

How would using the app help Jules find the solution?

Use the app to send important communications to parents and use the “documentation” feature to attach files to members during the season.

Not to mention automatic attendance management that saves you hours of work!

With the “documentation” option, you can share registration or consent forms, worksheets, tournament planning and even images!

A coach who manages more than one team saves time simply by avoiding printing 20 copies.

By simplifying the coaches’ tasks, they will be less tired and will have more time to promote player development.

“Everything is done on its own thanks to the app! Apart from sending a few reminders to the laggards, who take a few minutes a week. I can’t imagine how long it would take without the app.” – A satisfied technical director

Adam has been playing hockey since he was 5 years old. At his last practice, he wasn’t feeling very well, but still decided to play.

This proves his immense love for hockey.

The next day, Adam is very sick, and unfortunately he contaminated some of his teammates, as well as the coach. He was so excited about playing, he chose not to mention it to his coach.

The Health Module of the app allows the coach to create a custom form that is automatically sent to all members prior to each event. If a member fails the questionnaire, the coach is notified and can handle the case.

For Covid-19, this form reduces the risk of contamination. This will also ensure the safety of the coaching staff and the players. This form will allow coaches to track players’ health in just a few clicks. An epidemiological investigation can be done in less than 5 minutes!

“It’s a great way to make sure our kids are safe when we drop them off at practice! It’s also fast and efficient!” – A mom reassured

5. Foster a sense of community

It’s the end of the baseball season and the coach, Charlie, would like to hold a sporting gala to reward the players who have been the most assiduous as well as the volunteers.

Charlie is involved in more than one baseball club, so she doesn’t remember exactly which players were most present from one team to the next. It is important for her to recognize everyone’s efforts, but she does not have the statistics for the entire season.

She puts a note on her desk to be more vigilant during the next season and postpones her event.

How would MonClubSportif help Charlie better account for statistics across his teams?

With a sports organization management application, you can find attendance statistics for each of the teams you are responsible for.

You will see which players stood out during the season, and who were the most present.

With these statistics, Charlie could plan his sporting gala and reward the most deserving members. She will also be able to use the discussion tab to invite volunteers to join the event, to show her appreciation.

Organizing such an event is also a good opportunity to raise funds for the club for next year.

The app facilitates communication between the different members of a sports club, which greatly promotes a sense of community.

“The statistics tab is really cool! As a player, it allows us to challenge each other during the season just for fun!” – A well-motivated player

Think MyClubSportif is the solution for you? Visit our website to learn more and enjoy a free one-month trial!

Since graduating in 2019 with a communications degree, Gabrielle has always worked in the world of sports. A tennis enthusiast since she was very young, it is a privilege for her to share her passion with you. She won't brag about it, but she takes a lot of pleasure in getting up at 4:30 in the morning not to miss a Formula 1 race!

How to make the most of your free trial –  Part 1

You’ve been working in amateur sports for a long time, but you’re not yet convinced that a sports association management app can save you some time? Well, that’s some good news! MonClubSportif offe... 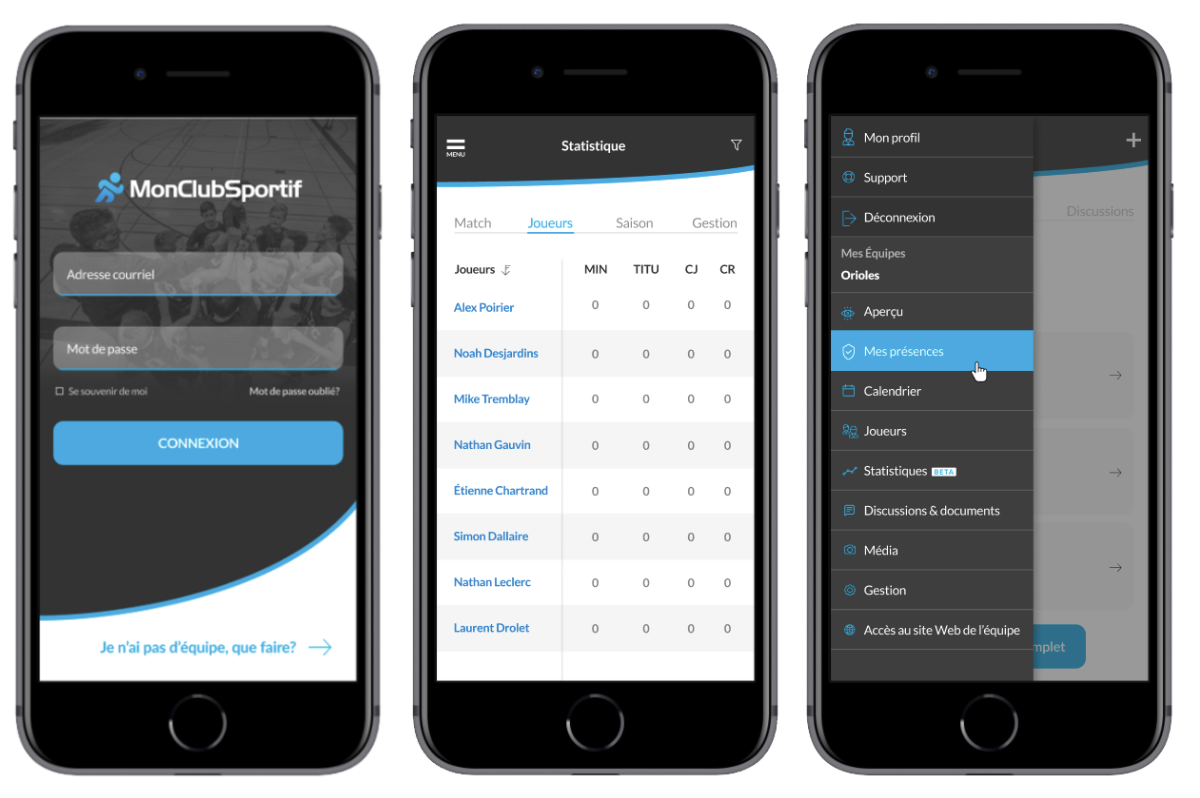 A practical sports team management app to manage your club

No one escapes technology. Now more than ever, people have learned to manage their schedules through digital calendars linked to their computers, tablets, or smartphones. Wherever they are, they ha...